Patch these network device flaws that have been used by state-sponsored attackers.

The US is warning that hackers working for China have been exploiting publicly known flaws in network devices as part of broader attacks to steal and manipulate network traffic.

The National Security Agency (NSA), Federal Bureau of Investigations (FBI) and the Cybersecurity and Infrastructure Security Agency (CISA) have listed 16 flaws in network device software from 10 brands including Cisco, Fortinet, Netgear, MikroTik, Pulse Secure, and Citrix that were publicly disclosed between 2018 and 2021. Most of the flaws are rated as critical.

These flaws are the ones most frequently exploited by hackers backed by the People’s Republic of China (PRC) since 2020, according to the agencies.

“This technique has allowed the actors to gain access into victim accounts using publicly available exploit code against virtual private network (VPN) services or public facing applications – without using their own distinctive or identifying malware – so long as the actors acted before victim organizations updated their systems.”

Using credentials from the targeted RADIUS servers, the actors then employed custom automated scripts for Cisco and Juniper routers to authenticate to an affected router via Secure Shell (SSH) and execute router commands. The actors saved the output of those commands, including individual router configurations, and then moved the information to their own infrastructure.

Having gained router configurations as well as valid accounts and credentials, the attackers would have been able to manipulate traffic within a targeted network and exfiltrate traffic out of it.

“The cyber actors likely used additional scripting to further automate the exploitation of medium to large victim networks, where routers and switches are numerous, to gather massive numbers of router configurations that would be necessary to successfully manipulate traffic within the network.”

“Armed with valid accounts and credentials from the compromised RADIUS server and the router configurations, the cyber actors returned to the network and used their access and knowledge to successfully authenticate and execute router commands to surreptitiously route, capture, and exfiltrate traffic out of the network to actor-controlled infrastructure.” 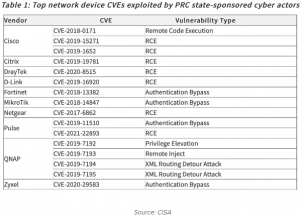